The Argonne is a region in the department Meuse.
It is an agricultural region interspersed with woods, the biggest and most famous wood being the Argonne forest where the opposing sites left many traces during the four years of fighting.
Two hills, Le Mort Homme and Côte 304, were extensively fought over in 1916 during the Battle of Verdun in an effort by the Germans to reach the city of Verdun, which is nearby.
Other well known sites in this beautiful region are the Butte de Vauquois and Romagne-sous-Montfaucon with the largest US cemetery in Europe. 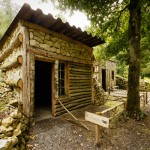